I intend to use this Blog to give updates on my Amsterdam trilogy and to interact with visitors to my website.

Periodically, I will share some of the interesting facts about 1500s Amsterdam that I learned while doing my research. They will be labeled DID YOU KNOW?

I would very much like to receive feedback from visitors who graciously take the time to read excerpts from my manuscript on my FICTION IN PROGRESS page. To enter your comments, please look for the Blog post with the sample cover of my novel. 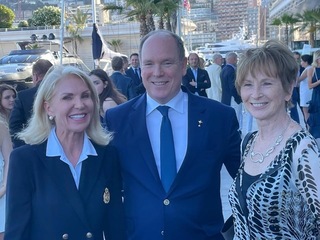 At the Monaco Yacht Club with Prince Albert and American Susan Feaster, longtime friend and former neighbor, who invited us to fete Americans competing in the US vs. Europe celebrity golf tournament that she founded and hosts each year. Susan is a remarkable woman, and we are lucky to have her again as our neighbor, she in Monaco and we in Nice. It was our first maskless outing since Covid restrictions were eased in France and first time meeting royalty. A memorable event. 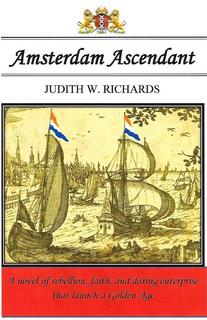 My FICTION IN PROGRESS page has five excerpts:

Please feel free to comment as you like, on all of them at once or any one of them. Your feedback will be greatly appreciated, whether constructive criticism, praise, or something else. If you have a question, ask away. I will do my best to answer it promptly.

The five excerpts give a good overview of your "Amsterdam Ascendant" manuscript: its action, drama, and love. The "Action" excerpt describing the storm is quite dramatic as is the taking of the Spanish ship in the "Start of Chapter 1" excerpt. The "Love" excerpt leaves us hanging as you intended, no doubt, and the Saucy excerpt is just that thanks to Griet.

A well researched novel that piqued my interested in the history of that era as well as the intriguing characters. Of particular note is the hardship that having a family member spending months or years at sea imposed on the relatives at home. The first chapter grabs your interest immediately and makes you want to read to the end!

Thank you, Judy Searles and David. I’m so pleased that you liked the excerpts and want to read on.

Very well done excepts for a very interesting book! I look forward to reading it when it is published. Lovely writing.

Thank you so much Marilyn A Miskowich for you comments.

Hi Judy,
Action packed start to your novel. From 1492 and 200 years on was a fascinating time in Europe and the new world. There are so many interesting events that transpired with political, cultural and religious wars and undertones, both overt and hidden. In many ways Amsterdam was a sanctuary for the disinherited Sephardics, misfits, and Calvinists. I wonder how much that period of strife helped to shape the great artists to emerge during the Renaissance. The juxtaposition of your fictional characters with some historical figures would be very captivating. I look forward to reading your book!

Thank you, kal. This period of time is indeed tumultuous and also fascinating because of all the changes it brings.

Chapter 1 is a good start. Plenty of action. Flows well and easy to read. I like the short sentences. Would like to know more about the Dutch Sea Beggars if they really existed. The book covers a lot of places so a map or maps would be helpful and add interest.

"Love" and "Saucy" are very different approaches. Hope they both end well!

Margaret, thank you for your comments. Yes, there are several maps in the book, and there is also a Fact or Fiction? section to answer questions such as yours. The Sea Beggars were indeed real and played a pivotal role in the revolt.

Really enjoyed the pace - a real page turner. Made me want to enquire more about this time and place in history. Not too keen though on the cries of "Ahhh!" and "Aargh" coming from the slayed Spaniards. A bit too comic book for me. Detracts from the overall tone. But other than that as I said really enjoyed it.

Carol, I am very pleased that you enjoyed the excerpts and liked the pace. Your constructive criticism about exclaimed sounds is well-taken and helpful. They are tricky to use, and I continue to refine my writing style regarding them. 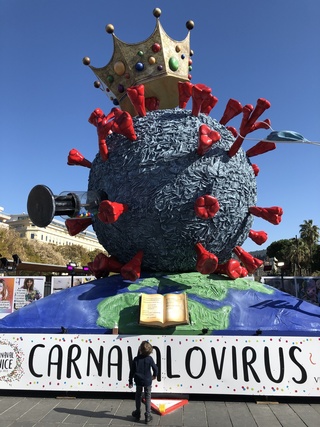 Nice's Carnaval (Carnival) is canceled this year. Instead, we have the literally and figuratively grotesque Carnavalovirus, which by the way is not so over the top when compared to Carnaval characters and floats of bygone years. Interested in seeing more photos and videos about my life in France? Go to @judithw.richards on Instagram, where I post about the arts, serendipitous discoveries, and other things that interest me.

Kind of gross looking but makes fun of the virus, I guess. 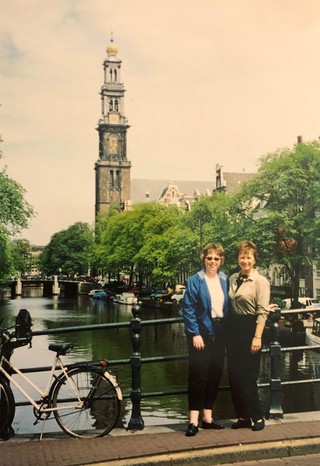 I was going through old photos and came across this one of my sister Sharon and me, taken in 2003. Sharon had come to Amsterdam, where David and I had rented an apartment for five weeks, to celebrate her 40th birthday. We took in museums and a Yo Yo Ma concert and were delighted when our mutual friend Englishman Lloyd Briscoe surprised us with a visit. Sharon's birthday was celebrated at the charming Restaurant 't Zwaantje (The Little Swan) on Berenstraat not far from our apartment on the Prinsengracht. Nice memory.

This is a nice photo of two sisters, who from the coloring of the Amsterdam photo, looks like it was taken in the 1940s.

I agree that it is odd coloring. Perhaps the photo has faded, but it gives a nice effect anyway.

Lovely photo. Reminds me of the wonderful time I had staying with you in Paris.

DID YOU KNOW? In Amsterdam, you can visit the Begijnhof, a fascinating and tranquil Catholic compound. 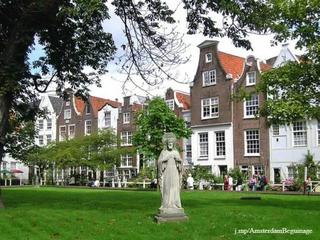 The Begijnhof is in the heart of the city and was established shortly after the 1345 miracle. It is the home of the Beguine sisterhood, who are not nuns or typical Catholics. The Begijnhof plays an important part in my story because fictional Aunt Margaretha is a Beguine. She is well-educated, spiritual, tends toward mysticism, and is devoted to helping the needy. She teaches literacy and religious principles in the vernacular and not in Latin, which the church hierarchy frowns upon, along with the Beguines' mysticism. Margaretha came to the order with her own money to buy a house in the Begijnhof and is a savvy investor.

After Protestants took over Amsterdam's government in 1578, they seized Catholic facilities, and banned the annual Miracle Procession and Catholic worship in public. The church within the Begijnhof was taken over, but the Begijnhof residences were untouched because they were private, not church, property. When the large Holy Place church on the miracle site was confiscated, its holy relics, including the miracle Holy Communion host, were entrusted to the Beguines. After 1578, the Beguines started holding clandestine church services in their homes.

Did only Beguine sisters live in these building surrounding the central park?

Yes, the compound was exclusively for Beguines.

Hope the history of Begijnhof is included in your book. The conflict between Catholics and Protestants and how it affects families and their business will be interesting to read.

Thank you for your comment, Margaret. The Begijnhof’s history is included a bit, but the story focuses more on the higly-independent Beguines themselves, who I think are fascinating.

DID YOU KNOW? Amsterdam was once a pilgrimage destination because of a miracle. 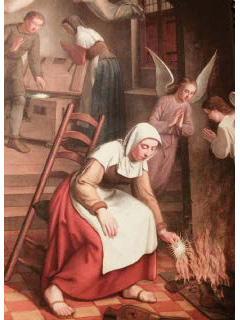 In 1345 a miracle occurred in Amsterdam involving a Holy Communion host that had been given to a dying man, which he vomited up. The host was thrown into the fire, did not burn, and instead levitated above the flames. The site of the man's house became a pilgrimage destination similar to Santiago de Compostela. Holy Roman Emperor Maximillian came and so did Charles V. Successively larger churches were built on the site, and nineteen or so monasteries and convents were constructed nearby. Streets acquired names such as Heiligeweg (Holy Way), Gebed Zonder End (Prayer Without End), and Kreupelsteeg (Crippled Pilgrims), which are still in use today.

The miracle is important to my story because fictional Papa, who converted from Catholicism to Calvinism as an adult, fondly remembers participating in the Miracle Procession that commemorated the event in March each year. As a child, he wore a devil costume and marched alongside little girls dressed as angels, with wings and all. When older, he and his classmates sang as they walked and stopped periodically to perform a short play about St. George slaying a dragon. The procession was full of pageantry and involved everyone of importance, including the guilds, cloisters, and archer groups that carried candles, banners, and paintings of their patron saints.

The miracle is also relevant to my fictional Aunt Margaretha, a Catholic Beguine, which you will read about in my next Did You Know? post.

When Protestants took over Amsterdam's government in 1578, they banned the Miracle Procession and seized the large Holy Place church on the miracle site. It was not until the mid-1800s that the procession was again allowed, but the Holy Place church continued to be largely disused until 1910 when it was finally dismantled. If you want to learn more about the miracle and Amsterdam in general, start with Russel Shorto's very informative book, Amsterdam: A History of the World's Most Liberal City.

This is making a bit of a big deal about vomit, don't you think?